What Race Is That Brazilian Girl? – A Man’s Guide To Racial Identity In Brazil

What Race Is That Brazilian Girl?

I’ve been thinking about breaking down racial classifications in Brazil, but it would be pretty boring if I explained it like a professor.

According to the Brazilian Census, these are the racial categories.

Then, I had a bright idea.

What if I went through the different racial categories by describing what a woman would most likely be identified as in Brazil.

To keep things simple, we are going to describe each Brazilian girl with one of these five terms:

There will be some overlapping since a particular Brazilian girl could be described as negra, morena, parda and mulata. One could even be white and mixed depending on who is looking at her.

But I’m going to try to represent each woman with one term.

You would think this would be the most straight forward racial group. A white girl should be easy to point out in Brazil right?

My first example is the beautiful actress Maria Flor. Catch her in one of my favorite movies, Forbidden To Forbid. Last time I checked, it was on Netflix.

This is an obvious white Brazilian girl although she probably has a black cousin or something.

But then, you may have a Brazilian girl like this who is what I like to say “off-white”.

To my eye, there is a difference between actress Nanda Costa, pictured above, and Maria Flor. Costa looks more ambiguous. I can’t see her being called strictly white in America. She has a Selena Gomez look to her. Is Selena seen as just white?

But I can see people calling her white in Brazil. Do you think she is white or mixed?

This is an easy one. These are just Asian women. There is a big Japanese population in São Paulo, Brazil. They have a historic community downtown called Liberdade. I highly recommend checking it out.

This is a Brazilian woman with Asian ancestry.

This is a confusing term for many people today. I know back in the day when Brazil was still a new country, a negro and negra were very easy to identify.

But today, with so much mixing and self-identification, you just don’t know what someone identifies with.

I’ve met the lightest, black Brazilians with straight hair who want you to call them negro. Then I meet a Brazilian with the same shade or even darker tell you they are moreno or pardo.

Let’s look at some pictures.

The beautiful actress Cris Vianna has been described as morena, mulata and negra from my research. In this guide, she represents negras.

This woman is negra as well. Although I can see someone saying she is morena.

Pretty straight forward so far with negras right? But check out these Brazilian girls who can be called negra as well.

Actress Camila Pitanga doesn’t like when people question her blackness.

Actress Raquel Villar has been called black on this website. Check out my article about the most underrated Black Brazilian actresses. But still, she looks ambiguous compared to Cris Vianna. I classify her under Afro-Brazilian, so she is negra.

These two terms are the same thing. Someone who is mixed or seen as brown. You really never know who sees themselves as brown in Brazil.

I don’t even think Brazilians are 100% sure of what they think of themselves. I know this one Brazilian girl who flip-flops from being negra to morena to mulata.

I guess all the terms mean the same thing to her.

Perhaps, she feels negra more today than she will tomorrow. She might identify as black or mixed depending on the circumstances.

Self-identification is deeper than what I’m showing in this article. For a more serious look into race in Brazil, check out my article The Different Shades Of Black In Brazil.

Anyways, these are women I would look at in Brazil and say, “Yeah , she is mixed.”

Take note, these are Brazilian women who would never be called black in Brazil or America. They are undoubtedly viewed as mixed. There are plenty of Brazilian girls who could be parda in Brazil, but if you seen them in America, you just might think they are black.

The physical features of Brazilians are so diverse, it can be difficult to put someone in any category. I really believe the only opinion that matters is the person’s self-identification.

Race in Brazil will never be concrete and this article is my own biased perspective. You might look at these pictures and think “He’s wrong, she isn’t black”.

Well, what makes your opinion right? 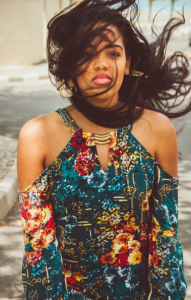