The Different Shades Of Black In Brazil

During a one hour special, Dr. Gates traveled to Brazil to tell the story of Afro-Brazilians. He traveled to Rio de Janeiro and Salvador to interview historians, politicians, capoeira instructors, rappers and of course, the people in the streets.

His main question was, “What is black and who is black in Brazil?”

Who is black in Brazil is a complex question. Unlike the United States, Brazil never believed in the one drop rule; meaning one percent of African ancestry did not make a person black. A significant amount of blackness would make them non-white, however. They would be considered mixed or in Brazilian Portuguese: pardo.

According to some Brazilians, a person like Will Smith would be seen as pardo based on the simple fact that his skin is light brown and not “pitch black” like the stereotypical picture of your average African.

One trip to Brazil and you will hear many descriptions of black or darker hue skin. Take a peek at a few Brazilian entertainment websites and you will see writers describing the same celebrity of African descent in different ways: moreno, negro, mulato, pardo.

The video below demonstrates how loose the concept of blackness is in Brazil compared to other countries.

To comprehend why blackness is less concrete in Brazil compared to a country like the U.S. or Canada, you have to learn about the history of slavery and the era after it.

Brazil received the majority of Africans during the Trans-Atlantic slave trade, accounting for around 40% of all slaves. Many factors contributed to this fact including the short travel time from Angola to Brazil compared to other places in the Americas and the high demand for slaves due to Brazil’s highly profitable exportation of crops such as sugar, coffee, gold and diamonds.

Business was booming and Brazil grew to be one of the richest countries in the New World.

Due to the harsh travel climates from Portugal to Africa then to Brazil, most of the Portuguese colonizers settled Brazil by themselves without their wives or families. Human nature reigns supreme, even over racism. Portuguese men began “relationships” with African women and created a mixed racial class. This was called miscegenation.

The mixed class in Brazil were treated slightly better than full blacks, receiving educational and job opportunities not permitted to slaves. Despite this, certain Brazilians, including some Afro-Brazilians, believe Brazil was and still is less racist than other slave-holding countries due to the heavy mixing.

The infamous doctrine of having a “racial democracy” began when a few Brazilian historians compared their slavery to other slave countries like the United States. Despite less segregation in Brazil, they were the last country in the Americas to abolish it in 1888. 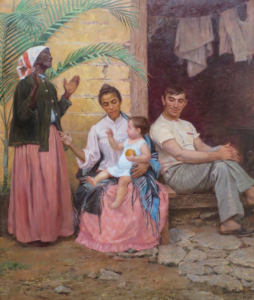 After slavery, Brazil was heavily black. This troubled the white Brazilian government, so they began to advertise Brazil to the poor classes in Europe who wanted a new start in life. During the late 19th century, Brazil began to “whitened” its country through white immigration.

Brazil didn’t only have hopes of increasing the European descended population; they wanted these new white-Brazilians to also continue the legacy of miscegenation.

The mixing of races continued. White Brazilians, especially men, continued to have children with black women, even if they had a family already. Many Afro-Brazilian families advised their children to date white-Brazilians to “lighten the family” and give their family more life opportunities.

Today, you can still find Brazilians who believe in this mixing not for love, but for reducing their African heritage in hopes of improving their living conditions.

The Increase Of Awareness In Black Brazil

As a result of blackness being seen as inferior throughout Brazilian history, many black Brazilians do not call themselves black. Instead they use lighter terms which signify them being brown, caramel, light brown, mocha, etc.

But there are better days to come.

Black consciousness and civil rights are improving in modern-day Brazil. More Afro-Brazilians are identifying with their African heritage. There are social policies being passed to solve racism and its historical relationship with class in Brazil. The younger generation is growing up seeing more positive Afro-Brazilians on television.

Organizations such as Educafro are fighting for the rights of Afro-Brazilians every day and people are being forced to listen. Expos like Feira Preta are promoting black businesses and black group-economics. And Black Brazilian women are showing off their Afros (despite the discrimination of black hair texture) and ditching the straight wigs more each year.

With the increase in black pride, hopefully the fear of being called black will lighten up.