“Real” What? The Currency In Brazil 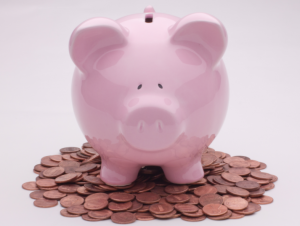 Despite a recent downturn, Brazil is still one of the biggest economies in the world. Brazilians love to consume, whether it’s food, clothing or electronics.

And if you want to join in on the fun during your trip, it’s mandatory to exchange your currency in Brazil to theirs.

The currency in Brazil is called the real (pronounced “hey-al”).

A Brief History Of Currency In Brazil

To understand the current economic climate in Brazil, the period before the inception of the real must be explained.

During the 1980s, Brazil experienced the end of military rule and the reestablishment of a democratic society. Optimistic for the future, Brazilian government began working on turning a new economic leaf. 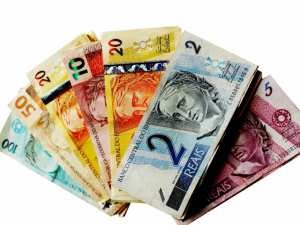 For the 1980s and even most of the 1990s, Brazil’s economy experienced what many economists now call “stop and go” economic strides. Brazil’s inflation rate spiraled out of control due to the government’s lax policies on printing money.

A significant cause of the oversupply of money was the building of Brazil’s capital, Brasilia during the 1950s. Brazil didn’t find any stability until the Real Plan that was implemented by former president Cardoso.

Brazil finally experienced low inflation and a stable economic base to produce growth.

“In 1994, Fernando Henrique Cardoso, the Brazilian Social Democratic Party (PSDB) economy minister in the next administration introduced the Plano Real, with full backing from the international financial world.”(Baily 2)

The new currency, which was linked to the U.S. dollar, provided stability for the first time in years. Inflation was kept relatively low and Brazilians were able to breathe again.

But, Brazil’s economy continued to experience volatile periods due to overspending, the shaky economic climate in Asian countries during the late 90s and the U.S. recession in the early 2000s.

It was not until President Lula took office that Brazil finally saw economic prosperity.

President Lula picked up where Cardoso let off and stabilized the economy with conservative fiscal policy and an increase in trade.

The 2008 recession significantly impacted the global market and interrupted the economic growth of the four fastest growing economies of the world, the BRIC countries.

Consisting of Brazil, Russia, India, and China, the BRIC countries during the 2000s exploded on the economic scene with overwhelming booming economies.

For example, China experienced as much as 10 percent economic growth for several years and became an exporting machine. Like the Asian powerhouse, Brazil has seen their economic growth take off because of exporting commodities to countries such as the U.S. and Germany.

However, the 2008 recession hurt demand and slowed Brazil’s growth.

The South American nation is considered to be a somewhat closed economy that can sustain itself with its domestic market, but the developed world or “G7 economies” played a significant part in Brazil’s economic emergence.

“The fastest growing economies of the world depend on money from Western banks to build factories, buy machinery and export goods to the United States and Europe. When those banks stop lending and the money dries up, as it has in recent months, investors’ confidence vanishes and the countries suddenly find themselves in crisis.” (Molano 2)

How To Exchange Your Currency In Brazil

So, you see that the currency in Brazil only recently became the real.

Forget about the history! How do I exchange dollars to reais?

When you land at the international airport, you will need to exchange your money before venturing out. For a quick estimation of what the exchange rate is during your trip go to www.XE.com. 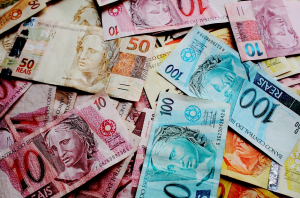 First timers usually make the mistake of exchanging too much money in the airport. As a rule of thumb, you only want to exchange enough money to get to where you are staying.

You won’t get a great exchange rate at any cambio (money exchange), so just bite the bullet and get as much money as you need to catch a taxi or bus.

To see how I recommend getting from the airport to your accommodation, check out my post here about how I got tricked out of $80 reais.

After checking into your hotel or apartment, you will have to get more money.

I like to use ATMs after I get to my place and withdraw a few days worth of cash. This way, I won’t have to deal with excessive fees that come with withdrawing money multiple times.

I’ve heard of guys getting their bank card scanned and stolen, but this has never happened to me. I highly recommend to only use ATMs inside of banks where it’s extremely difficult to put scanners on ATMs.

In my experience, ATMs that always work with my MasterCard are at Banco do Brasil and Citibank.

Depending on your spending habits, you might not be able to do this because of the daily withdrawal limits ATMs have. In that case, you can always use your bank card at most mainstream stores. Just remember that it will charged as credit.

Other guys go to local area cambios and get their money that way. Whatever works for you, do it.

Talking currency in Brazil isn’t that bad. And it should be one of the first things you learn before your trip since it plays such an important part in your daily routine. Check out some of the words and phrases below, write them on flashcards and memorize, memorize, memorize.