The 13 Warning Signs Of Brazil Addiction

The first step is to admit you have a problem.

Go ahead and do that, then subscribe to the blog.

Okay, to the early warning signs of Brazil addiction.

1. You notice the lack of attractive women in your city

This is too real for my brothas, especially if you are from a state that isn’t well-known for having attractive women (looking at you Ohio and Michigan).

I remember the first time I came back from Rio and walked around my city. I was literally depressed for a good two weeks.

Going to Rio is like entering a different universe. I’m not saying the best looking women are there, because I always hear about how women in Colombia or Costa Rica look better. But I highly DOUBT those countries blow Brazilian women out the gate in terms of femininity and overall sexiness.

After returning to the states, you will realize just how boring and plain a lot of women look here. Now we do have great cities with sexy ladies. I grew up in Atlanta and now live in the Washington, D.C. area, so I’ve been around beautiful women all my life.

But, these cities still can’t compare to Rio. Brazil can really warp your sense of what pretty is if you aren’t careful.

2. You harshly judge people who live off fast food

Beans, rice and everything nice.

That’s all I eat when I’m in Brazil. After a couple of weeks, I might stop by Mickey Dee’s for the occasional french fry, just to switch it up.

And that habit has stayed with me over time, even in the states.

Since I eat rather healthy, I notice how unhealthy people are around me. Chips, soda, donuts, fried food.

When you start eating like a Brazilian, you’ll forget how you used to eat. The old eater in you vanishes. Your family might look at you as if they no longer know who you are.

And you look at them the same. Don’t judge them though. Just understand they don’t know any better.

3. You begin to greet people with a thumbs up

Everybody throws up the thumbs in Brazil. And if you stay there long enough, you will eventually start thumbing it up too.

For example, in the beginning of my summer stay in Rio de Janeiro back in 2012, I fought the urge of giving thumbs up since I just wasn’t used to it. 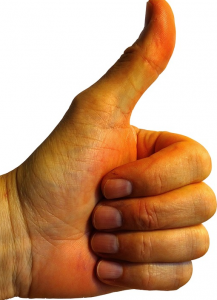 I caught myself at the last minute and kept my thumb down.

But the power of the thumb was too much to handle. The longer I stayed in Rio, the more thumbing up I did. I couldn’t stop it.

This Brazilian guy wanted to throw the thumbs up sign so bad, you can see it in his hand, but he missed it.

If you start to suffer from this while in Brazil, you REALLY are immersing yourself in the culture. Kudos to you.

4. You use WhatsApp daily to talk to your Brazilian friends

This is a must-have app for Brazilian travelers. Everyone in Brazil uses it since most people don’t have unlimited text messaging.

I became so addicted to it that I started adding my U.S. friends to it and only contacted them via WhatsApp. As if I can’t text them normally.

Yeah, if you are finding yourself spending all day texting on WhatsApp, you might be experiencing Brazil addiction. This can be good or bad, depending on how you look at it.

5. You check for flight deals to Brazil every day

I know I am not the only one who patiently waits for their daily Flightdeal email to arrive in their inbox.

Fortunately for Brazil fans, there is usually a great deal on flights to Rio or Sao Paulo every week in the newsletter. Frequently, I’m on Google Flights and Skyscanner checking out the current prices to Brazil too.

I think everyone who loves to travel does a quick search now and then to see what deals are available.

But if you are dealing with Brazil addiction, a real addict, you are specifically searching for flights to Brazil and nowhere else.

6. You can’t stop telling your family and friends about Brazil

You don’t talk about Brazil enough until the people around you comment on it. But even then it might not be an addiction yet.

Everyone has topics they talk about relentlessly. Usually, it’s about work or school or their children. Whatever you spend the majority of your time doing, you are going to talk about it.

If Brazil is on your mind daily, you will talk about it. Your family and friends will just have to deal with it. In my opinion, it’s not an issue until you are in a conversation about something totally unrelated to Brazil, but somehow you bring Brazil into the mix.

7. You become unbearably critical of everything wrong about America

Ah man, I understand America is not the best country in the world (seriously it’s not, I’m sure there are a few countries not in the spotlight where people are much happier overall, but that’s another topic), but some people are too critical of the negatives.

Some guys go to Brazil for a week, come back to the states and all of a sudden they believe Brazil is paradise compared to America.

They return and want to tell everyone how horrible their life is, how everyone in Brazil is happy and partying on the beach 24/7.

“Being black in Brazil is so much better than America, America is the most racist country in the world” (although many black Brazilians wish they could get to America where blacks have more of a fighting chance to change their living conditions)

Some guys haven’t even been to Brazil and talk like they have.

Take a chill pill and relax bro. America isn’t as bad as you think and Brazil isn’t as great. America and Brazil have their strengths and weaknesses. For now, let’s leave it at that.

8. You cut corners so you can save more money to visit Brazil

“Hmmmm, I got a box of cereal and some Top Ramen, I think I can make it another week without buying groceries.”

Yeah, you get REAL cheap when you want to travel to Brazil. Well, two things will happen to you involving money if you find yourself becoming addicted to Brazil.

First, you will become more frugal and realize you don’t need to spend a lot to have fun or do things you want. But the most important thing is you will begin focusing on how to make MORE money, so you can visit Brazil.

And when you get to Brazil, you can still keep those principles and have a great time like I mention in this post about 9 Tips To Save A Ton Of Money Visiting Brazil.

Before going to Rio, I wanted to live in California or Toronto, Ontario. I didn’t seriously think about learning a foreign language. I never thought about starting a business, becoming financially free or being location independent. My goals in life were very routine:

Today, I have an uncommon perspective on life. Some call it bohemian. My granny called me a free spirit. I just see it as wanting well-being. Overall well-being is not the same as happiness. Happiness is a temporary state that never lasts.

In Brazil, I saw more well-being despite people living modestly.

I saw a different side of life in Brazil, away from people who grew up like me.

I really immersed myself in the Brazilian culture and lived with families; I had experiences I don’t think I would have had if I did a regular vacation at a resort or a planned study abroad program with other foreign students.

If you totally flipped the script on your life goals after visiting Brazil, you might be influenced by Brazil more than you even realize.

10.You seek out Brazilians in your city

Like I mentioned in the post,7 Best Places To Meet Brazilian Women In America, there are many ways to find Brazilians in America. Especially if you live in large metro areas like New York City or Washington D.C.

After you get a taste of Brazilian culture, you can’t get enough. If you’re stuck in the good ol’ U.S.A. for a while, but still want to exercise your Brazilian Portuguese language skills, www.meetup.com is a great website to find Portuguese exchanges.

Most large cities also have at least a couple of clubs or bars that are Brazilian-oriented.

If you are into physical fitness, taking up a Brazilian Jiu-Jitsu or Capoeira class is a good idea.

11. You become very cautious/avoid situations that could get your Brazilian visa revoked

A lot of my decisions in life in the last 3 years have been heavily influenced by being addicted to Brazil. I am very cautious about where I go and who I hang out with.

There are things I would do in Brazil that I would never do in America. America feels more like a police state. Like there are eyes/cameras on you 24/7.

God forbid I meet the wrong person and something terrible happens.

I look out for cars 3 times before crossing the street now. I make sure I chew all my food in fear of choking to death and never seeing Rio again.

12. You overstay your visa

Wait, so when you are in America you are overly cautious because you cherish your Brazilian visa so much; but when you are in Brazil you break the law and take the risk of losing it?

Sometimes you just aren’t ready to leave. It’s reached the point where you see no reason to not overstay your visa and just pay the fine later.

The great thing about Brazil is that they need your tourist money. Unless you do something terrible, like a crime related to drug trafficking or sex, you can overstay your visa, go to the airport and pick up the bill. You’ll just have to pay it when you return.

Yes, I speak from experience.

Some people are too afraid to do it. Actually, I don’t promote breaking the law. My experience might not be identical to yours. You might overstay your visa, show up to the airport and they burn your passport right there while you break down in tears.

But if you are seriously dealing with Brazil addiction, you at least have thought about it during a long-term stay.

13. You start a blog about Brazil

This blog was years in the making and something that I take very seriously.

It was created January 1st, 2015, but I am just now getting into it and understanding what it will take to maximize its true potential.

I don’t want it to just be an outlet for my own thoughts and experiences about Brazil. The primary reason for this blog is to offer a website for guys like me who find themselves in love with Brazilian culture. I want this and the Facebook page to be valuable resources about Brazil.

Everyone has their own space in the world, a country or city where it just feels right. It could be Atlanta or London or Tokyo, Japan.

For me, it’s Brazil.

This post was mostly for fun and I wasn’t serious about a few things.

However, if you saw yourself in any of the warning signs I mentioned above, Brazil might be your space too.