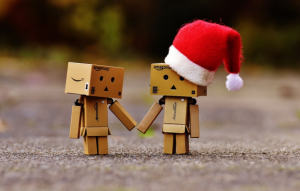 Somehow I made it to the big Jesus statue on the Corcovado Mountain. Hailing a cab from Copacabana to the tourist attraction wasn’t a bad ride at all and I saw a bit of Rio on the way.

I was a couple of days into my first trip and I felt like I needed to speed things up since I wasn’t going to be there that long. I was a little burned out on all the non-English-speaking people who surrounded me.

Today, I love rolling around Brazil solo away from the tourists and expats. But back then, I wanted to talk to people about my trip and what they knew about the city.

So, I decided to do what any tourist does: go to tourist attractions where I was bound to bump into somebody from America.

I was standing in line for the statue wondering if I was going to waste my $20 on an overrated landmark when I heard English in front me.

Two light-skinned brothers were having a conversation about something I couldn’t make out, but I knew I had to introduce myself, so I could have someone take a few pictures of me in front of the statue.

“Yeah man, after a few years, you just get used to the humidity and environment. This is nothing compared to Bahia I’ll tell you,” proclaimed the older gentlemen, who looked to be about 60 years old.

“Texas has nothing on this weather, I love it,” the younger man replied.

Raising my hands in prayer to the statue above and inching my head closer to the conversation, I asked, “You guys from America by any chance?”

I didn’t figure this out until my second spring break to Brazil when I visited São Paulo. But it’s really common sense, especially if you have minimal Portuguese knowledge.

It’s the top of the morning and you have just landed in Rio de Janeiro by yourself. You made it to your hotel in Ipanema and want to venture out for a little while.

But you have no idea where to go or what to do. You aren’t really interested in the regular “walk on the beach and drink a caipirinha” agenda so you hop in a taxi and head to the downtown area.

You hop out and walk around exploring the city. You notice on almost every block, there is an English school. Every few minutes, without fail, you see one. Curiosity hits you and you enter one.

“Good morning, how are you?” you ask the front desk.

“I’m an American visiting Rio de Janeiro for the week and I’d like to speak to one of your classes. Is that possible?” you say.

“Wow, sure. Come with me and talk to the manager, “the secretary replies with glee.

It’s that easy to get your foot in the door to making friends at an English school.

I’ve personally done this in São Paulo by first emailing the school before my trip. I think the owner of the school thought I was more important than I really am because when I arrived it was as if they thought I was there to do business.

But that’s neither here nor there. I accomplished what I set out to do and that was to make friends in Brazil. To this day, I keep in contact with a couple of the students and they help me every time I visit.