What Does Being A Gringo In Brazil Really Mean?

You know tourists when you see them in your city.

They usually have a big backpack and they are holding a map.

Their $500 camera is dangling from their neck while they adjust their fanny pack which holds all their important documents and money.

Nowadays, they even get the bright idea to walk around your city with this thing:

Asking people to take your picture is just too much to ask for in 2015. You need a selfie stick, so you won’t have to bother anyone. 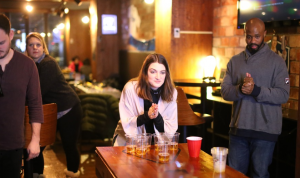 For one, they can’t believe they are in Brazil.

It’s a picturesque country. Foreigners from North America and Europe love the scenery. Usually, back home isn’t as beautiful. They smile way too much and look puzzled about where to go next.

They also wear clothing that doesn’t match the environment.

As an American myself, I wanted to make sure I blended into the Rio scene as much as possible during my first trip.

Eh. I didn’t really accomplish that. But my ultimate goal was to not be called a GRINGO!

While taking Portuguese in school, I came across the term estrangeiro. That means foreigner. I thought Brazilians would call me that when I visited.

Quickly, I found out that I was a gringo. At first, I thought the term was negative. I felt offended.

Are Brazilians trying to belittle me? Not cool.

I needed someone to school me on what gringo meant.

Let’s look at a few misconceptions about Brazilian gringos.

People think gringos are only white people. If you are African-American, Japanese or Indian, you aren’t a gringo in Brazil according to these folks.

But I think these people are using the definition of gringo from Spanish-speaking countries. Brazil is in Latin America, so the mistake is to be expected.

Depending on your race, you might hear gringo more often. Because of my skin tone, I’ve been mistaken for Brazilian a few times.

Gringos and the sex trade in Brazil are linked for obvious reasons. Many men travel to Brazil and sleep with prostitutes.

They visit termas (whorehouses) and sleep with acompanhantes (prostitutes).

Recently, I was talking to a Brazilian woman. She was suspicious of me because she “knew what us gringos came to Brazil for”.

It took a minute but I was able to explain to her I wasn’t one of those types of gringos in Brazil. It sucks to be stereotyped because of other people’s actions but that’s just life.

If you don’t understand the difference between Hispanic and Latino, check out this comic. But yeah. People don’t think Mexicans or Colombians are gringos because they speak Spanish.

How can a person from Argentina be a gringo? The country is right there by Brazil.

It can be confusing.

The Definition Of Gringo In Brazil

A gringo in Brazil is simply someone not from Brazil.

According to Wikipedia, a gringo is a foreigner. And according to me and my time in Brazil, that definition is true.

It doesn’t matter what you look like. I’ve been called a gringo in Brazil. I’ve met gringos from India, Australia, England and Nigeria.

You can be a Spanish-speaking Chilean and Brazilians will still call you a gringo.

Women from foreign countries are gringas. Whether they are black or white or purple. It doesn’t matter.

And contrary to popular belief, the term is not negative. Being called a gringo or gringa has nothing to do with your skin color or your reasons for visiting Brazil.

Although I don’t condone paying for sex, being called a gringo has nothing to do with guys flying to Rio and sleeping with prostitutes. I don’t like that some gringos do this, but they would still be called gringos if they didn’t. Many Brazilians view their behavior as negative, not them being gringos.

So, learn to live with being called a gringo when someone meets you in Brazil. Your skin color or actions while in Brazil won’t make you exempt from being called it.

Understand it. Accept it. Embrace it.

I Don’t Like Being Called A Gringo In Brazil!

Oh, you think you are above being called a gringo? You want to be called estrangeiro?

Not going to happen. People who get mad about being called gringo annoy me now. It’s almost as bad as meeting that rare Brazilian who wants to call me a United Statian because “we are all from the Americas so we are all Americans, not just you guys”.

Give me a break and stop whining.

But if it really does irritate you when Brazilians call you gringo, there is a way to stop being called it, at least among some Brazilians.

How Shad? Tell me.

Get to know Brazilians on a personal level. Then and only then will you stop hearing the term gringo or Americano.

Instead of gringo, you will be called by your name. You’ll be called amigo, mano and cara. The longer you stay in Brazil, the less people see you as foreign.

You’ll be seen as a friend.