Does Your Afro-Brazilian Girlfriend Identify As Black?

“But we are all mixed here, Shad”

That’s what an Afro-Brazilian girl told me in São Paulo a couple of years ago. We were talking about race in Brazil; why I noticed more dark faces in the poorer areas and lighter faces in upscale neighborhoods.

Her response was there are poor whites and blacks who live together, so it’s really not a racial problem.

“We all live among each other”

That’s true. To an extent. Only in the poor areas will you see black and white Brazilians living together in significant numbers. But in the rich neighborhoods?

We Are All Mixed 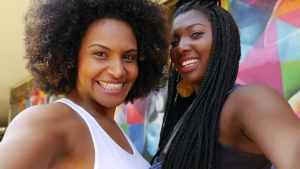 You might bump into a black woman or two in America who claims to be mixed with Indian in the states, but in Brazil it’s on a whole other level.

You will meet a few women who will not accept you calling them negra or preta. They self-identify as mixed.

Biologically, people in Brazil really are a mixture of various things. For centuries, they have promoted the mixing of races.

Yet, despite the heavy mixing, there are still blacks and whites. There is a racial divide and it affects modern Brazilian society. And there are plenty of Afro-Brazilians who realize the inequality.

Contrary to rumor, many Afro-Brazilians identify as black. Albeit on a smaller scale than the United States, there is a black movement in Brazil, particularly in São Paulo and Rio de Janeiro.

There were more slaves sent to Brazil than any other country in the Americas, so it’s logical for many Brazilians to identify with their African ancestry.

Before we get into why your Afro-Brazilian girlfriend might not identify as black, let’s look at a couple of reasons why she might.

Guys ask me all the time what the racial make-up of Brazil is like. Are there a lot of black people? Will I fit in?

There are plenty of Afro-Brazilian parents, who are both black and their children are obviously black as well. Think of actress Cris Vianna or Olympic gymnast Daiane dos Santos. To deny their African ancestry would be absurd.

And even then, I have read Brazilian articles referring to Cris Vianna as a morena.

You might be surprised by how many Brazilians are REALLY into American Black Culture. In a city like São Paulo, you will find a lot of Black American influenced attire, music and style.

When you love the African texture of your hair, you usually love the color of your skin and being black too.

You can check out pictures of Afro-Brazilian women and their cacheadas on Rio In A Week’s Instagram page @rioinaweek.

Why Your Afro-Brazilian Girlfriend Does NOT Identify As Black

This is a common occurrence in Brazil according to many of my Afro-Brazilian lady friends. Many light-skinned Afro-Brazilian women are described as “mulata”, “parda” or “morena” instead of negra or preta.

I’ve been told this happens for a couple of reasons:

1. The person calling the woman this does not want to offend her. They think calling her “negra” or “preta” is offensive. Basically, those terms are seen as negative in the person’s mind.

2. If an Afro-Brazilian woman is viewed as very attractive, they might not be seen as “just black”. She may have cabelo fino (good hair) or nariz fino (thin nose). For example, actress Camila Pitanga identifies as black although her features are very European to most people. Is Camila Pitanga black to you?

Many people in Brazil only view people with very dark skin and stereotypical African features as negro. With this mentality and the way people treat others who are seen as black in Brazil, it’s not surprising meeting Afro-Brazilian women who self-identify as parda.

Just like the Black Power Movement can influence an Afro-Brazilian woman to gravitate towards self-identifying as black, racism can make her shun it. It can even make her shun other blacks.

One night in São Paulo, I went to a rock n roll club.

To make matters worse, I was rolling solo. So, I go inside and scan the atmosphere and to no surprise I was the only
black man in there. But it was alright, I kind of realized that while in line outside.

While I walked around trying to find a good spot, I noticed a black woman. She was on the light side, but black nonetheless.

Now common sense would tell you she probably wasn’t interested in black men; why else would she be in a rock n roll club? But I had to try anyways, she looked great.

So, I stepped to her. When I tell you how disgusted she looked when I approached her; it was like she just saw a ghost.

I’m not a runway model or anything, but I know I’m not ugly either. I couldn’t help but laugh instantly; it could have been the shock of getting rejected without even getting a chance to say a word. It could have been the look on her face as well. I never got that type of response ever.

I retreated back to the temporary friend I made while standing in the entrance line and licked my wounds. Later that night, I saw her dancing with a white dude.

Who knows why my attempt was rejected. I could have been too short. Maybe the white guy was her boyfriend. She could have just been harassed before and in a bad mood.

But what I do know is some Afro-Brazilians, men and women, intentionally avoid other blacks because of racism in Brazil. They don’t identify as black and they surely don’t date black.

To read more on the racial dynamics of dating in Brazil, check out my post: The Different Shades Of Black In Brazil.

When you date in Brazil, you come across women from all walks of life. If you are like me and prefer Afro-Brazilian women, you will really experience different personalities and beliefs.

My most important advice is to date someone who is on the same page as you. I’ve found that race is a significant topic in dating; people usually date others with the same racial views.

In Brazil, you don’t have to settle. In 2016, you can find many Afro-Brazilian women proud of their roots.