Being Black In Brazil

Black In America = Black In Brazil? 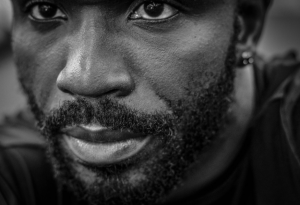 What do Black Brazilians and Black Americans have in common?

Can you think of anything?

Black people in Brazil have a similar story to Blacks in America – with slight differences.

So when author Habeeb Akande sent me a fresh copy of his latest book, Illuminating The Blackness: Blacks & African Muslims In Brazil – I was curious and ecstatic to read it. 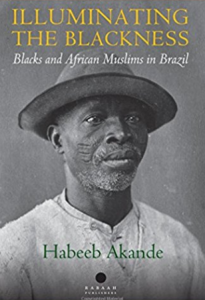 This book shows you just how Black, Brazil really is.

Most people know nothing about the huge black population in Brazil.

You may hear comments like “Oh they aren’t Black, they are Latinos” or “Well, they aren’t really Black right?”.

In Akande’s new book, you’ll discover a powerful and interesting history about Blacks in Brazil.

Why You Should Read This Book

Like Habeeb, I’ve spent significant time over the years connecting with Black Brazilians.

It’s not by chance.

I actively pursue building relationships with Black Brazilians because it’s important to me to connect with people from other countries and cultures.

A quote in Illuminating The Blackness explains it clearly.

Malcolm X encouraged peoples of African descent to identify with oppressed people in the world and connect with their blood brothers in Brazil, Venezuela, Haiti and Cuba. He remarked, “Not one black man is prominent in Brazil. The Negroes there are still at the bottom.”

Habeeb explains how every black experience – whether it was in the Americas, Europe, Asia or even Africa – is similar.

During his trips to Brazil, Akande noticed the similarities between Black Cariocas (Black people from Rio de Janeiro) and Yorubas in Nigeria. He also noticed the racial hierarchy in Brazilian society that a few people sweep under the rug.

Because of this racism, Black Brazilian history – and African Muslim influence in Brazil – has been downplayed.

His features and casual attire helped him fit within Brazilian society – particularly in Bahia. In Salvador, Akande writes:

During my visit to Salvador, at times I felt as if I was in Nigeria. Some of the Bahian cuisine and a number of the customs are from West Africa. Many Bahians informed me that they were proud negros/negras (black) and are connected to their African history. Many morenos/morenas, (brown/mixed-race) Brazilians who phenotypically were Europeans – or Asian-looking, even spoke fondness of their African roots.

Akande decided to write Illuminating The Blackness because the current Brazilian educational system doesn’t teach the history of Black Brazilians and Muslims in Brazil. 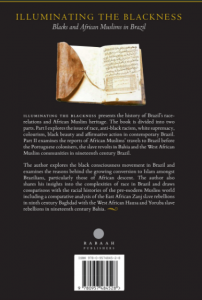 Illuminating the Blackness presents the history of Brazil’s race relations and African Muslim heritage. The book is divided into two parts.

The author explores the black consciousness movement in Brazil and examines the reasons behind the growing conversion to Islam amongst Brazilians, particularly those of African descent.

Meeting the Sultan of Sokoto in Norther Nigeria xvi

Final Thoughts on Being Black and Muslim in Brazil xxiii

Twenty Facts About Brazil That Many People Do Not Know xxv

Fighting Racism through Education and Activism 21

Who is Black? What is Blackness? 22

Islam in the History of Brazil 41

Contributions of Africans Muslims to Brazil 48

The Islamic Revival in Brazil 53

Why are Brazilians Embracing Islam? 57

The Structure of the Book 66

The Ideology of Racial Democracy 86

The Politics of Black Hair 114

The Media and the Fashion Industry 122

A Problem for the White Elite 157

AFRICAN MUSLIMS IN BRAZIL BEFORE THE PORTUGUESE 167

Was the Male Revolt a Success 204

Comparisons with the 869 Zanj Revolt in Baghdad 205

The Racial Democracy Of Islam In Brazil 247

CATEGORIES OF WHITENESS AND BLACKNESS IN BRAZIL 251

Read Illuminating The Blackness by clicking the link below