Are You Afraid Of Visiting A Favela?

I Almost Got Shot 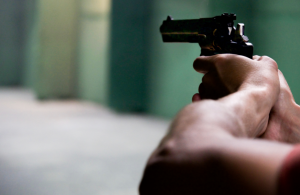 I was walking to the bus stop of the favela I was staying in when two men approached me from the right.

One guy shouted out something in Portuguese that I didn’t understand and proceeded to motion his hands toward him. I kept walking, eyes looking straight ahead.

Then suddenly, one of the men darted towards me; I turned around and he had a gun pointed to my head.

He ordered me to get on my knees and empty my pockets. He asked me why I was there and if I was the police. I saw my 21 year-old life flash before my eyes.

Actually, none of that happened.

Is City of God Real Life?

Most people who have a hint of interest in Brazil have seen the monstrous film City of God. It is a tale of the drug trade in a Rio de Janeiro favela during the 1970s and the effect it had on the community’s residents, especially the children.

But is this kind of violence and mayhem still present in the favelas of Rio?

The short answer is NO.

Not to say that there isn’t crime. There is plenty of crime in Rio, inside and outside of the favelas (It’s logical to think criminals will target the gringos with money in Copacabana versus the poor in a favela).

But the type of stuff that was happening in the film City of God is no longer common or a daily occurrence.

Unfortunately, crime is rising in other regions of Rio de Janeiro state due to gentrification. The poor are being pushed out of the state capital and into the outskirts. Does this sound familiar?

So don’t expect to see sex motel massacres and children shooting each other in the foot if you decide to check one out.

A City Within A City

Technically, favelas are not their own cities or towns; they are just communities or neighborhoods in a metropolitan area.

But if you visit many favelas in Brazil, especially in Rio de Janeiro, you will realize that some of the residents of these unique places hardly ever feel the need to go beyond their neighborhood. It’s really simple to understand.

Some favelas have everything that you would need to live daily. They have grocery stores, barbershops, beauty supply stores, diners, clothing shops, internet services, gyms, churches, clubs, etc.

For instance, one of the most well known favelas in Rio is Rocinha. Rocinha is arguably the biggest favela in Latin America with a population estimated at 300,000 people.

This is the size of many mid-sized cities in America. Rocinha is sometimes called one of the “nice” favelas; I must admit it is on the “luxurious” side compared to other places I have seen in Rio.

Would You Expect To Hear This On A Tuesday Morning In Rocinha?

Some of the best people that I met while living in Rio lived in favelas.

They were true friends that took the time to show me around and help me when I was in need. They were the ones who had a place for me to sleep when I visited on a whim.

Comparable to the hoods of America, the vast majority of people in these communities are just hard working folks trying to make a better life for their families.

Many Brazilians will tell you to avoid the slums at all costs. But if you are from the hood or just a predominantly black area in the United States, haven’t you heard that same type of suggestion from people here?

Not to say that there are no bad people in favelas; there are definitely bad seeds that you should stay away from.

But when you are tired of people trying to sell you something on every block in Ipanema or you just want a nice, hearty meal in a churrascaria that isn’t overpriced, you might want to head to your friendly, neighborhood favela.

My suggestion is to meet a Brazilian who is familiar with Rocinha or Vidigal and tag along with them to check it out, preferably during the day if its your first time. The hustle and bustle of favela life can be a sight to see.

You could also go on a tour where you pay a small fee to have a guide show you and a group around for a few hours. This is what I did my first time while visiting Rio and I used that opportunity to return and eventually live in the favela.

There are currently 37 favelas under the UPP program, but do your homework before you go to any of them.